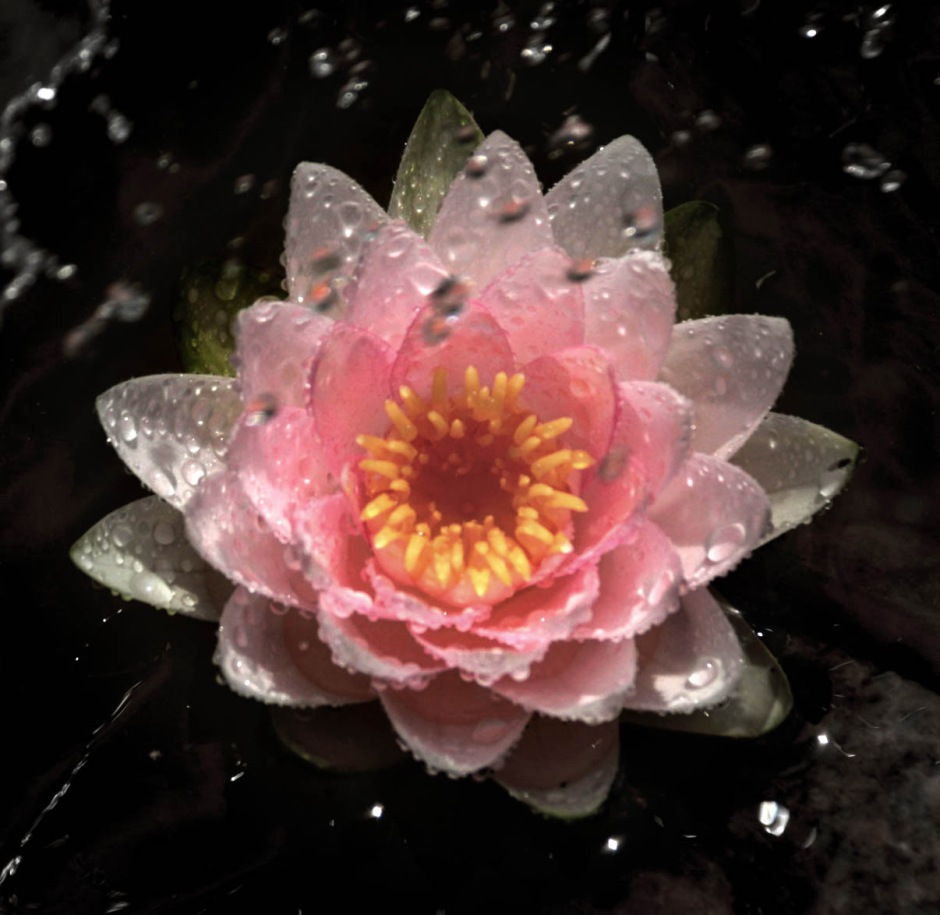 The most important lotus, the true lotus of Buddha, is depicted as pink in color.

Stemming from this title, the pink lotus represents the history and essence of Buddha.

My pond offers moments of pure delight..perfect for meditation, relaxation and presence.

Origins of the Lotus Symbolism

Lotus flowers were symbolically depicted as early as Ancient Egypt, where white and blue lotuses are more common. In Egypt, the flower was known as Seshen and was associated with Egyptian gods. Because of the way in which the lotus emerged from the water, followed the movement of the sun and then closed back up and returned into the water, only to repeat the process the next day, the lotus was associated with the sun god, Ra.

The Ancient Egyptians aksi believed that lotuses were symbolic of creation, rebirth, strength and power. Perhaps, for this reason, during childbirth Egyptian women tended to wear lotus amulets with a picture of Heqet, a goddess of fertility. The lotuses were present in art, hieroglyphics, and paintings to represent fertility, a new beginning, and purity.

Other historical references to the lotus can be found in Ancient Greece and in Indian religions. In Ancient Greece, the flower represented innocence, modesty, and purity.

References to lotuses in Hinduism can be traced back to at least 1400 BC through Vedic texts that depict Hindu gods holding or standing on lotuses. Early references can also be found in the Buddhist religion, and the Buddha is often depicted sitting on a lotus.

Symbolism of the Lotus

The meanings behind the flower relate to the symbolism of the lotus growing out of muddy waters. The flowers’ roots anchor it in the mud, but the flower rises above its murky environment, blossoming open one petal at a time. Based on these unique growing conditions, the lotus flower has come to have many symbolic meanings.

The lotus is a religiously significant symbol, especially for Eastern religions. While many of the symbolic meanings are similar, each religion has its own associations as well.

Buddhists see the lotus as a representation of life. The mud is the suffering, challenges, and obstacles we face, and the flower symbolizes overcoming those obstacles. This growth can be viewed as progressing towards a state of purity or the path to enlightenment. Also related to life, Buddhists see the flower as representing rebirth and reincarnation. The flower also signifies purity, spirituality, and self-cleaning.

The Sutra of the Lotus Flower of the Wonderful Law is an essential Buddhist scripture that highlights the teachings of Buddha about the lotus. The lesson states that without mud, there can be no lotus, but the lotus remains untainted by the mud. This scripture serves as a reminder that suffering and happiness are not mutually exclusive. Without one, you cannot have the other.

Within Hindu symbolism, the lotus is associated with prosperity, fertility, and beauty. The lotus is also associated with a number of Hindu gods and relates to the sacred Padma lotus. The Padma is the part of the soul that drives people towards spiritual enlightenment even through struggles. This drive is similar to the manner in which the lotus flower pushes through the mud and muck to reach the surface

The lotus is associated with several Hindu gods, including Lakshmi, Brahma, and Vishnu, who is known as the Lotus-Eyed One and is known for beauty and purity. Other gods are depicted with lotuses in artwork because of the association with purity and divinity.

Another association given to the lotus, according to some followers of Hinduism, is creation. Similar to how the lotus blooms with sunlight, Hindus believe the world bloomed into creation in the presence of consciousness.

The lotus flower is used as an analogy for how to live life, as explained by Bhai Gurdas Ji, an influential Sikh figure and writer. These writings are referred to as keys to understanding Gurbani and grasping the basics of Sikhism.

Accordingly, just as the lotus remains unsullied in the water, you must stay unaffected by the evils of the world. Another important point is the idea that as the lotus loves the sun and blooms for it, so will the person who, through loving devotion, know the Lord.

Those are just two of the many references he makes to the lotus flower throughout his teachings. It is mentioned an estimated 420 times as representing the human soul.

Other meanings of the lotus in Sikhism can be considered the same as the general symbolism of the lotus. However, it is worth noting that the lotus flower is not commonly used as a Sikh symbol today.

The lotus is not a main religious symbol of Jainism, a faith centered around self-help, but it is an identifying symbol for some Jains. The blue lotus is the symbol of Nami, the 21st Jain. A red lotus represents the 6th Jain, Padmaprabha.

The lotus flower naturally comes in a variety of colors. While the Hindu religion mainly uses the white lotus in its depictions, Buddhism uses a range of lotus colors, each with its symbolic meaning.